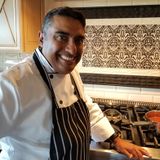 A third generation culinary professional who embraces the flavors of the world, blending flavors and culinary techniques of the east with the west. I have worked at some of the finest Establishments in Europe, and received training from Europe's best "Chefs" and mentored by Marco Pierre White. Having worked in France and Italy where my skills where honed! Was the Executive Chef at the Langham Hotel in London. Working alongside such "Chefs" as Albert and Michele Roux, Gordon Ramsey and Robert Irving to name a few.

I recommend Asheesh D as a chef

Chef Danee was great and son professional at my dinner. His food was awesome and he made each one of my guest as if they were the only ones there. Thank you

I have known Chef Asheesh for over 5 years. I wholeheartedly recommend him for this opportunity. He is a hardworking dedicated individual whose work ethic is beyond approach. His culinary ability is very taste worthy and he would be an asset in this position.